The Drogheda Wastewater Treatment Plant (WWTP) was designed for a capacity of 101,600 PE (Population Equivalent) to serve the greater Drogheda area and parts of East Meath.

See below for descriptions of each treatment process at Drogheda WWTP.

Primary Tanks are largely open circular tanks. There are 3 No primary settlement tanks on site, only 2 No. tanks are required for normal service. These tanks are largely open to the atmosphere except for the outer V-notch weirs, which are covered, and air is extracted for treatment in an odour control unit.  These tanks accept screened and degritted sewage. During primary settlement stage, solids settle to the bottom of the tank and are scrapped to the centre of the tank for removal and treatment in the sludge farm. The partially treated supernatant /wastewater then overflows over v-notch weirs for onward treatment.

Storm Water Holding Tanks: During adverse wet weather, where the incoming flow exceed the hydraulic capacity of the plant, dilute screened wastewater will be diverted to the storm tanks for settlement prior return to the plant for treatment or release to receiving waters. Cleaning of these tanks is via tipping buckets.

Aeration Tank: There are 6 No. aeration tanks on-site, each with an anoxic phase for nitrogen removal. During the secondary treatment phase the primary treated wastewater is mixed with activated sludge within the tank and aerated to convert carbonaceous material (food for bacteria) into cleaner water, biomass (which will be wasted or returned to the secondary stage) and carbon dioxide.

Final Settlement Tanks: There are 3 No. final settlement tanks on-site. After an appropriate retention time in the aeration tanks, the mixed liquor passes forward to the final settlement tanks for separation of the biomass from the cleaner treated water. Biomass / solids settle to the bottom of the tank and is scrapped to the centre of the tank for return to the aeration tank or wasting from the process (after further treatment in the sludge farm). The treated water (effluent) overflows v-notch weirs and discharges to the estuary.

Separate Sludge Picket Fence Thickener (PFT) Tanks are provided for each type of sludge. Imported sludges are also pumped into the Primary PFT. Following thickening, sludge is pumped forward to the blending tank for mixing to ensure a homogeneous mixture is pumped on to the anaerobic digestion plant. The purpose of digestion is to convert bulky, odorous raw sludge to a relatively inert material that can be rapidly dewatered with the absence of obnoxious odours. To mitigate odour problems in the sludge area, two odour control units are provided. One serves the Centrifuges and the second serves the PFTs, Blending Tank and the Sludge Storage Tanks

Digestion works by feeding the sludge into a heated enclosed reaction tank where naturally occurring bacteria degrade the organic material. The end product is biogas and stabilised sludge. The biogas is stored in the Gas Holders and can then be converted to both electricity and heat using Combined Heat and Power (CHP) units. The digested sludge gravitates to three sludge storage tanks from where it is then dewatered using Centrifuges in the Sludge Building. Sludge Cake is then lime stabilised and transferred to the Cake Storage Skips pending appropriate disposal off site. 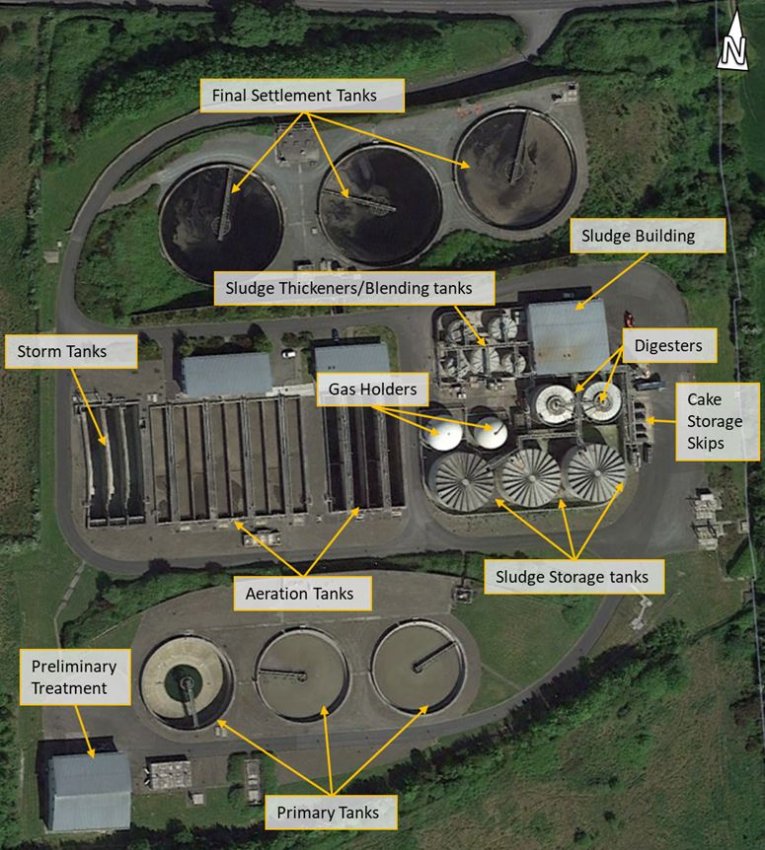 Irish Water is committed to investigating  any odour complaints in relation to the Drogheda Wastewater Treatment Plant as and when reported.

Further information on works commissioned  in relation to the Drogheda wastewater treatment plant are detailed below. It is however important to also note that odours can arise for a variety of reasons-  environmental factors such as rainfall can impact the dilution effect in a combined sewer network, estuary, low tides or ectocarpus (a type of algae) and seasonal warm temperatures can naturally give rise to odour issues; local conditions such as non-domestic and industry sources and increased agricultural activity can also lead to odours; and actions such as illegal dumping of waste into the sewer network and flushing inappropriate items down the toilet can cause blockages in domestic and public pipes (resulting in odours).

For more information on the importance of not flushing inappropriate items down the toilet please see our Think Before You Flush page.

In Q2 of 2021 Irish Water commissioned an independent odour report for the Drogheda wastewater treatment plant, the results of which are now available.

This odour modelling report is detailed and technical, but it identifies that the most significant potential odour source at the WWTP are the Primary settlement tanks,  with a number of other less significant sources. These odour sources contribute to 61% of the overall odour load to atmosphere from the existing facility.

Irish Water is delivering an extensive programme of upgrade works at the plant and on the network to reduce the risk of odour. Works already completed include - Odour control unit upgrades; works to three primary settlement tanks and two aeration tanks.

Works are not anticipated to be disruptive as they will take place on-site at the plant between 9am and 5pm. There is a possibility that some works may cause unavoidable temporary odours but we will seek to notify impacted customers in advance of such works happening via our web page (news updates).

Irish Water are also continuing to assess additional capital maintenance works (over and above the works on the digesters) that might be required on the Drogheda site.

Given the extent and distance of the sewer network in Drogheda, wastewater can potentially be held in the sewer for a long period of time before arriving at the treatment plant for treatment (particularly during the summer season). To reduce potential odours from the sewer network the following measures are being implemented:

Network jetting is being undertaken on an ongoing basis in Drogheda to clear general blockages in the network that could give rise to odours and  Irish Water also intend on installing sealed manhole covers at a number of specific locations in the network, to seek to prevent the release of any odours that might be present.

Irish Water is actively reviewing operational data from Drogheda Wastewater Treatment Plant and other similar sites in Ireland (and internationally) in order to seek to define and evaluate, appropriate, proportionate and sustainable additional mitigation measures for the site,  which might be considered by Irish Water. This review will include a cost/benefit analysis on the various options in-line with funding governance requirements.

Irish Water will now also implement plans to cover the Primary Settlement Tanks and will upgrade the existing odour control system (on the overflow channels of the primary settlement tanks). The timeframe for delivery of primary settlement tank covers and associated ancillary works is currently estimated to be by the end of 2027, allowing for detailed design, statutory planning, tendering and procurement/ execution.

Irish Water are also currently reviewing the full sludge line requirements and are considering other areas of the site for works, so that a capital replacement project for the site can be fully and comprehensively scoped and funded.

Irish Water will continue to provide on-going progress updates via our website on works underway and those which might be planned for the future.

Customers should continue to report any issues directly to Irish Water’s call centre which operates 24/7 on 1800 278 278 or by email to operations@water.ie.

Customers can view our Complaint Handling Code of Practice (COP) for more information.