The development of the Regional Water Resources Plan South West (RWRP-SW) will allow Uisce Éireann for the first time to review water supply needs collectively for the entire South West region and across the spectrum of risk including quality, quantity, reliability, and sustainability. It allows us to consider local options to resolve these needs and larger Regional Options that can address needs across multiple supplies.

The outcomes and benefits of this Regional Preferred Approach include: 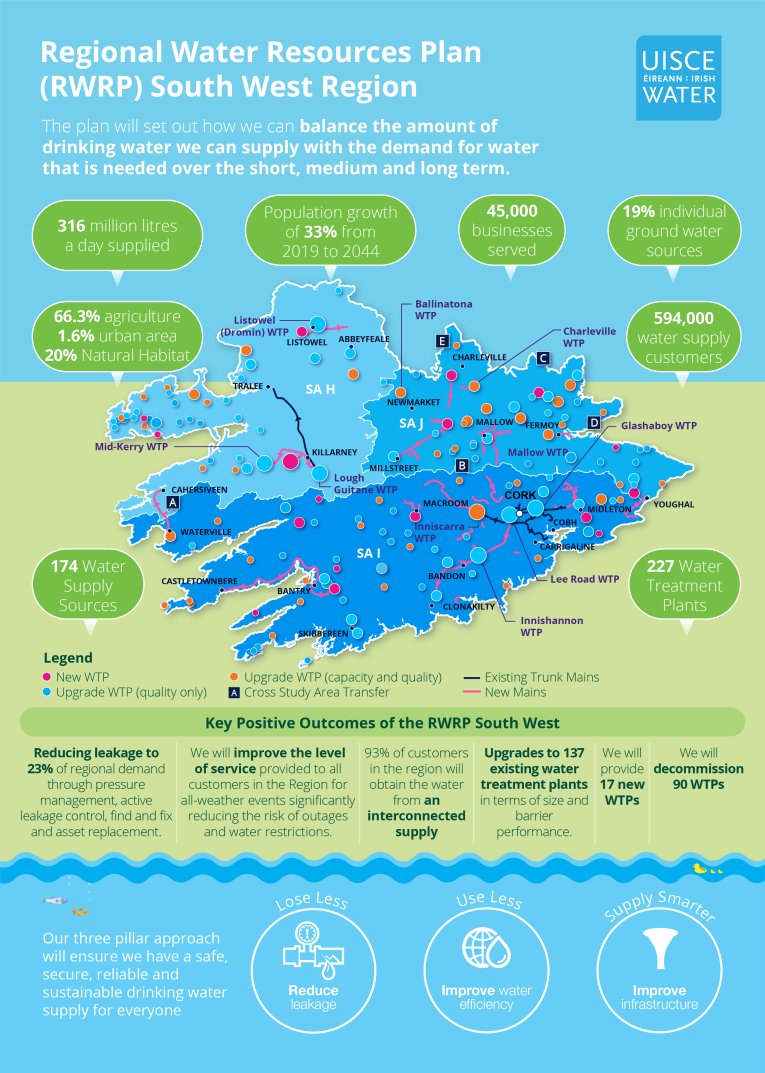 The Region covers approximately 13,000 square kilometres (representing about 20% of the Republic of Ireland) and extends from the southern tip of the country from the Iveragh Peninsula in the south west of County Kerry, north to the Shannon Estuary, and south east passing through county Cork into county Waterford to the Celtic Sea at Youghal. The region is supported by a strong network of key towns that provide secure employment and economic growth potential. Uisce Éireann supplies around 316 million litres of water per day to a population of 594,400 people and 45,000 businesses in the South West region. This represents more than 18% of Uisce Éireanns total supply nationally.

A list of the cities, towns, villages, and townlands covered by this Regional plan is available in the links below. The information provided in the townlands, towns and settlement lists that are included in the Regional Water Resources Plan South West are sourced from Ordnance Survey Ireland.

Townlands of the South West

Towns and Settlements of the South West Click to view map of towns in the South West area 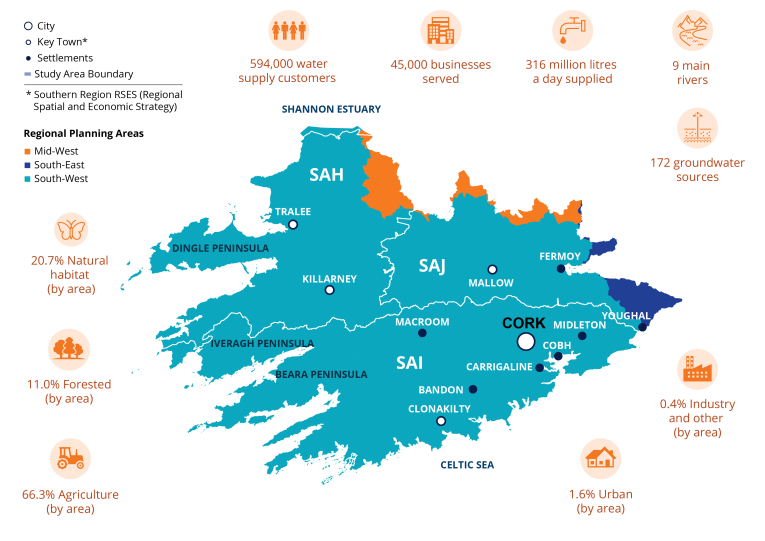 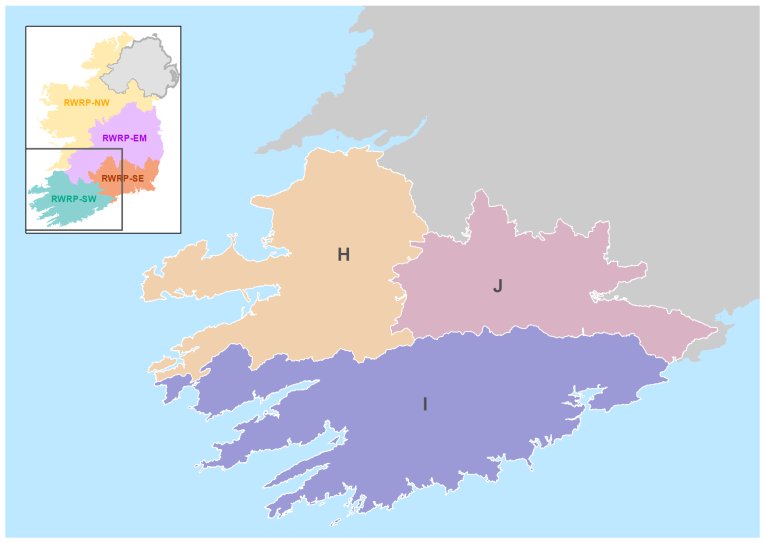 To deliver the draft RWRP-SW, we subdivided the region into smaller units to enable us to manage the process of identifying potential water supply solutions (options) and the selection of our Preferred Approaches to resolve our water supply and water quality deficits. These smaller units are referred to as Study Areas. A detailed Technical Report is provided for each Study Area describing the solution types at Study Area level and providing a summary of the detailed Option and Approach Development process and resulting outcomes for each Study Area. The Study Area technical reports are provided as appendices to the draft RWRP-SW document. The South West Region comprises three Study Areas as shown in the following image.

Our information brochure has more detail on the RWRP-SW and the public consultation that took place.

The submissions and observations received from the public consultation outlined above will be taken into consideration before adopting all four RWRPs. Once the complete NWRP has been finalised, compromising the Framework Plan and the four Regional Water Resources Plans and together they will be treated as a unified single plan. 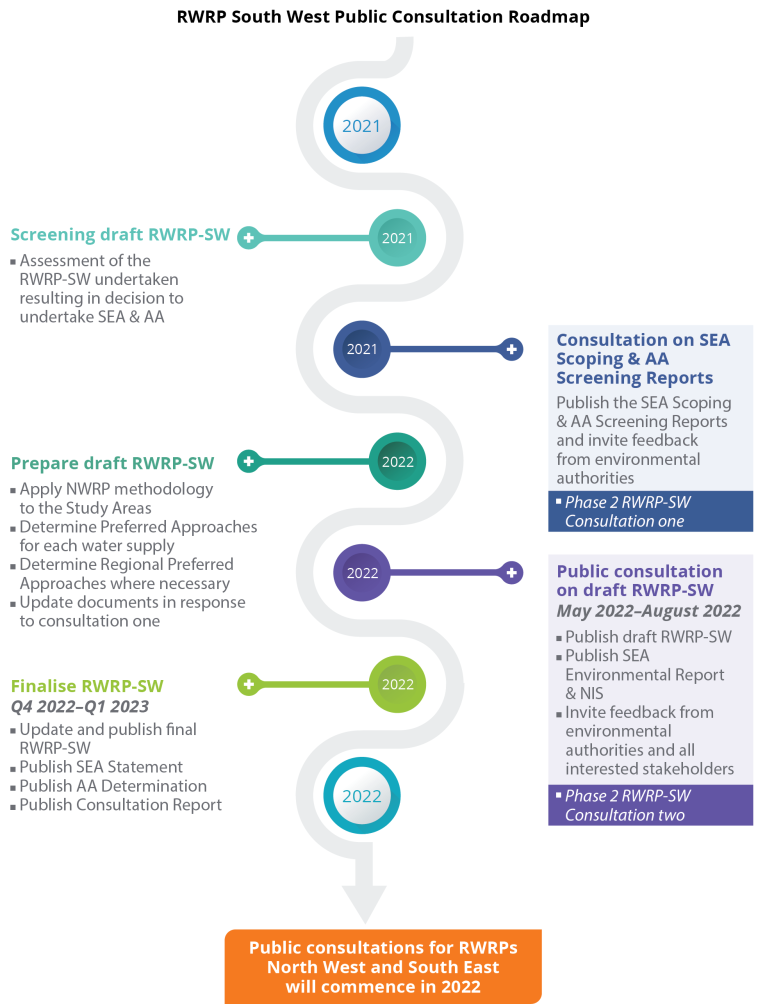 Note: Note: Two information files from the draft RWRP-SW have also been extracted from the documents for use by the EPA during the consultation process.