There was a buzz in the air around Newport as local trainee beekeepers pried the lids off their hives eager to check in on their new arrivals.

One by one, the six volunteer apiarists, who have joined forces with Irish Water on the Let it Bee project, a community approach to tackle pesticides in water supplies, fed their queen and her colony in preparation for the winter months.

Local angler and novice beekeeper, Martin O’Carroll is hoping the project will raise awareness around the dangers of pesticides and put an end to the ongoing issue of pesticide exceedances in the Newport drinking water supply.

“I joined Newport Angling Club five years ago and according to the experts a tear drop of pesticides can pollute a long stretch of a river. This project is to raise awareness of that and to help biodiversity; we all need to do our own little part,” explained the schoolteacher.

Supported by Irish Water, Mayo County Council, The National Federation of Group Water Schemes (NFGWS) and The Local Authority Waters Programme (LAWPRO) the beekeepers are encouraging their neighbours and friends to manage their lands differently in order to protect their water sources and biodiversity.

Aware of the knock-on effect of pesticides to wildlife and in turn to crops and plants, beekeeper Farrell Gallagher is hoping the project will help people understand bees’ vital function and the danger of pesticides to all living things.

Mr Gallagher has taken care of Achill Water Treatment Plant for the past eight years and he and his wife Monica are also renowned for their honey produce, looking after seven hives.

“I don’t think a lot of people understand the essential work of the bees; they are frightened of them.”

In order to avoid pesticides getting into water sources which put bees and the crops and wildflowers they pollinate at risk, the team of beekeepers and their trainer Jude Walsh, who is secretary of the Mayo Beekeepers Association, are encouraging farmers to look at new ways of controlling weeds.

“I come from a farming background and I understand the old ways of farming, but I also understand that we need to move with the direction that science is taking us. It’s better for the farmers and the environment as well,” said Mr O’Carroll.

The Let it Bee project also encourages farmers to plant and leave hedgerows beside water courses or drains leading to water course.  As well as providing food for the bees, this type of vegetation acts as a buffer zone to protect water course from contamination.

Beekeeper Jamie Brazys’ garden was never as beautiful as when there was a hive of wild bees on her property, so she jumped at the chance to get involved in the Let it Bee project.

“Feeding the bees and having the bees feed us is something I have been interested in for a long time. Pesticide use is on my radar; we grow a lot of our own vegetables because of pesticides and I’m aware that the honeybee population is declining but bees are so important to support our eco systems.”

“While our consultation with the HSE has concluded that the levels seen in our water supplies do not represent a threat to public health, it is, however, undesirable and therefore imperative that users of pesticides are mindful of best practice when using herbicides or pesticides and seek out alternatives.”

Sean Corrigan of NFGWS explained that “it’s not necessary or sustainable to be constantly applying sprays”.

“Pesticides shouldn’t be considered as the only method of controlling weeds. In fact, unsprayed biodiverse field corners and hedgerows along drains and rivers are being recognised for their contribution to water quality and the environment.”

He too is looking forward to garnering knowledge from local farmer and expert beekeeper, Jude Walsh who is training the volunteer beekeepers.

“Jude Walsh is well-known and respected in the Newport Catchment Area with a wealth of knowledge about bees. We are very fortunate to have him involved in the project.”

The Let it Bee project compliments Irish Water’s Biodiversity Action Plan, which sets out a national programme of measures to protect and enhance Ireland’s biodiversity. In fact, many rare species of plants, animals and insects have been making a comeback on Irish Water sites around the country as a result of the utility’s work in supporting biodiversity.

Determined to share her ten-year-old son and nine-year-old daughter’s enthusiasm on biodiversity, mum Cathrina O’Donnell signed up for the Let it Bee project.

“I had never set foot in an apiary before our first training session, but I found myself, in my new white suit, holding a frame, covered in bees. It was sink or swim,” she laughed recalling her first introduction to her family of bees. Cathrina is looking forward to a seeing the flowers and wildlife around her home thrive as the insects settle into their new surroundings.

“I live on a farm and am very conscious of pesticides. I see the mindset of my father’s generation changing and the kids come home from school with ideas on how to save our environment; they are very much tuned in. If we don’t have bees, then the flora and fauna will die out. Bees do so much for biodiversity and protecting our water sources that people don’t realise; they are not just some pesky things buzzing beside you.”

Residing alongside the river in Newport, farmer and bus driver John Kelly is “trying to do a little bit for the environment.”

“We depend on nature – the birds, the bees and water are very important. We depend on all these things and we’re just a small wheel in the cog, but we can do a lot of damage in a short space of time.”

Angler Martin O’Carroll enjoys nothing more than a few hours fishing on the river in Newport and can’t stress enough the importance of keeping pesticides out of the water.

“The smallest amount of pesticides making its way into the water can cause a disproportionate amount of pollution.”

The Kiltimagh native, who has made Newport his adopted home, is hoping the project will encourage the entire catchment area to join the campaign to rid the water supply of pesticides. “If the bees can travel a few kilometres from their hives then it’s the responsibility of everyone in that area to keep them healthy. It will only really work is everyone is involved.”

Catherine and Nick Primett’s three sons are fascinated by “all things wildlife and the environment” so the Let it Bee project seemed like the perfect fit for the family.

“We want to learn more about the bees and the way they function and what we can do to help and encourage them. We want to spread that word and the boys are interested in bringing that information into school with them,” explained Catherine.

But it’s not Catherine’s first introduction to bees. She can recall her days as a child, visiting her mother’s homestead and Jude Walsh’s bees buzzing in the background.

Farrell Gallagher was only introduced to his Let it Bee hive a few weeks ago and already he’s delighted with his hardworking queen. The experienced beekeeper is hoping for a good honey return next year but his day job as caretaker of Achill Water Treatment Plant means he’s more aware than most of the damage pesticides can do to the pollinators and the knock-on detrimental effects to our flora and fauna.

Since Wisconsin native Jamie Brazys and her family moved to Newport seven years ago, she has sown a vegetable garden, reared chickens and piglets and now she’s looking after a hive of bees. “Bees are another step in the process of learning how food is produced. Feeding the bees and having the bees feed us is something I have been interested in for quite a while.”

But the exceedances of pesticides in the water supply is something that worries the young mum and she’s hoping the Let it Bee project will help educate the community of the dangers of pesticides.

“We grow a lot of our own vegetables because of pesticides and I’m aware that the honeybee population is declining but bees are so important to support our eco systems.” 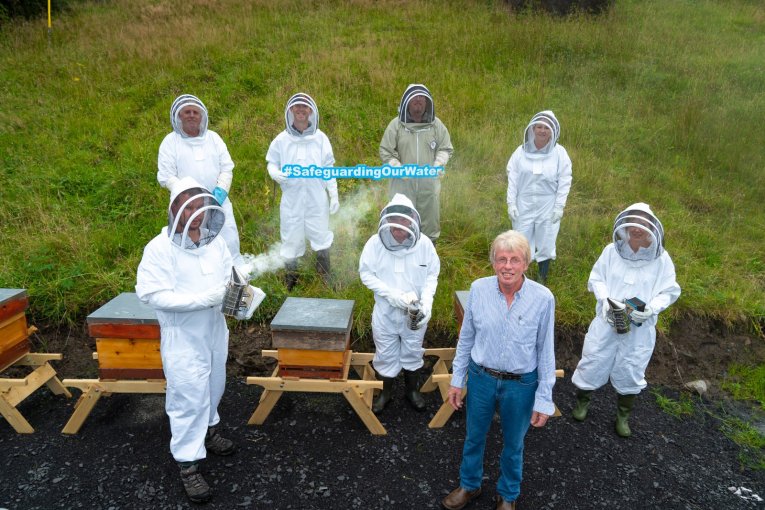 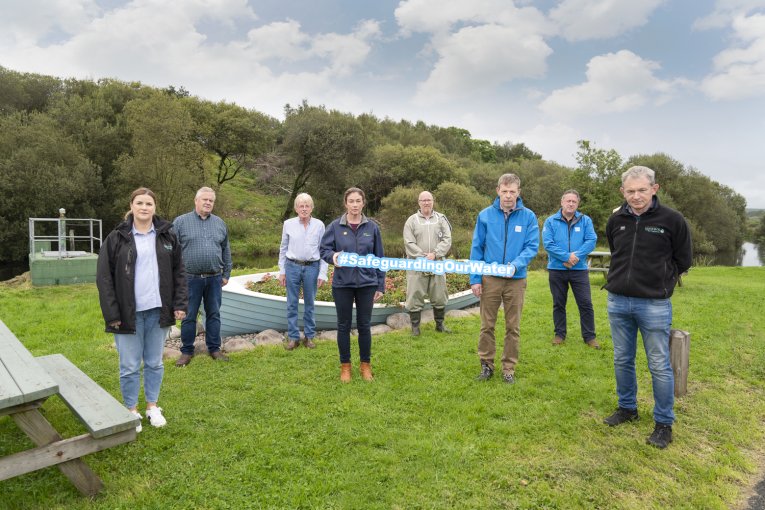 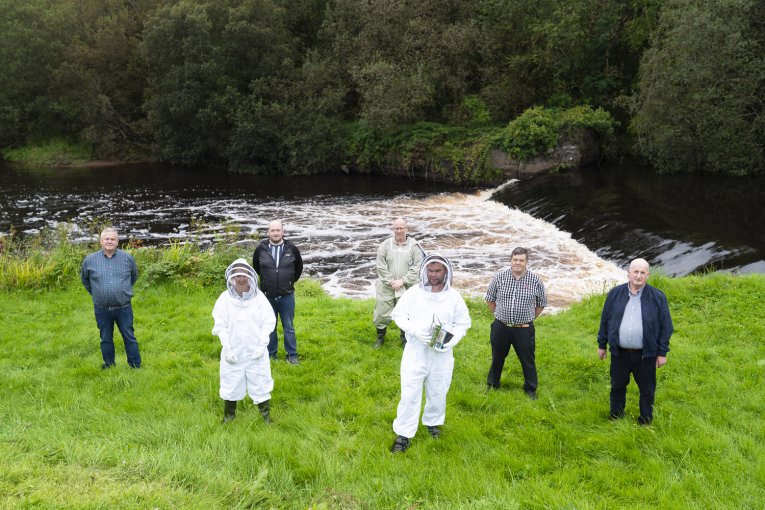